Same Kind of Different As Me

I have been blessed by books many times in my life and today it happened again. I've just finished an incredible book: Same Kind of Different as Me by Ron Hall and Denver Moore. It's a true story of inspired love and an emotional friendship between a homeless man, an art dealer and his wife.

The book starts at the beginning of each man's life and beautifully weaves a story of faith, friendship, compassion and powerful transformation. It's impossible to walk away from this book unchanged. One of my favorite quotes is actually at the end, in an interview with the authors. Ron, the affluent art dealer says this: "A successful person is one who is living a joyful life with the hand he or she was dealt. The upscale world I lived in seemed to be filled with a disproportionate number of unhappy people."

I can really relate to that. Scottsdale, Arizona is a very upscale world, with hundreds of thousands of unhappy people. When I look at my life outside the Arizona borders, I realize that most people I know are deeply unhappy, even though they are considered rich and successful by the world's standards. The number of unhappy people is truly disproportionate to the lives we are so blessed to live.

No one is given a perfect life. Same Kind of Different as Me challenges me to see the beauty in choosing to live with joy, no matter what the circumstances.

It is time to play a Wild Card! Every now and then, a book that I have chosen to read is going to pop up as a FIRST Wild Card Tour. Get dealt into the game! (Just click the button!) Wild Card Tours feature an author and his/her book's FIRST chapter!

You never know when I might play a wild card on you!

Same Kind of Different as Me 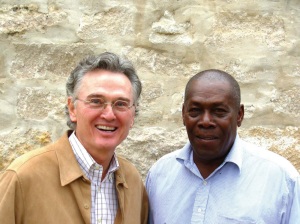 Ron Hall is an international art dealer whose long list of regular clients includes many celebrity personalities. An MBA graduate of Texas Christian University, he divides his time between Dallas, New York, and his Brazos River ranch near Fort Worth.

Denver Moore currently serves as a volunteer at the Fort Worth Union Gospel Mission. He lives in Dallas, Texas. Today, he is an artist, public speaker, and volunteer for homeless causes. In 2006, as evidence of the complete turn around of his life, the citizens of Fort Worth honored him as "Philanthropist of the Year" for his work with homeless people at the Union Gospel Mission.

Well—a poor Lazarus poor as I

The rich man died and lived so well

You better get a home in that Rock, don’t you see?

Until Miss Debbie, I’d never spoke to no white woman before. Just answered a few questions, maybe—it wadn’t really speakin. And to me, even that was mighty risky since the last time I was fool enough to open my mouth to a white woman, I wound up half-dead and nearly blind.

I was maybe fifteen, sixteen years old, walkin down the red dirt road that passed by the front of the cotton plantation where I lived in Red River Parish, Louisiana. The plantation was big and flat, like a whole lotta farms put together with a bayou snakin all through it. Cypress trees squatted like spiders in the water, which was the color of pale green apples. There was a lotta different fields on that spread, maybe a hundred, two hundred acres each, lined off with hardwood trees, mostly pecans.

Wadn’t too many trees right by the road, though, so when I was walkin that day on my way back from my auntie’s house—she was my grandma’s sister on my daddy’s side—I was right out in the open. Purty soon, I seen this white lady standin by her car, a blue Ford, ’bout a 1950, ’51 model, somethin like that. She was standin there in her hat and her skirt, like maybe she’d been to town. Looked to me like she was tryin to figure out how to fix a flat tire. So I stopped.

“Yes, thank you,” she said, lookin purty grateful to tell you the truth. “I really do.”

I asked her did she have a jack, she said she did, and that was all we said.

Well, ’bout the time I got the tire fixed, here come three white boys ridin outta the woods on bay horses. They’d been huntin, I think, and they come trottin up and didn’t see me ’cause they was in the road and I was ducked down fixin the tire on the other side of the car. Red dust from the horses’ tracks floated up over me. First, I got still, thinkin I’d wait for em to go on by. Then I decided I didn’t want em to think I was hidin, so I started to stand up. Right then, one of em asked the white lady did she need any help.

“I reckon not!” a redheaded fella with big teeth said when he spotted me. “She’s got a nigger helpin her!”

Another one, dark-haired and kinda weasel-lookin, put one hand on his saddle horn and pushed back his hat with the other. “Boy, what you doin’ botherin this nice lady?”

He wadn’t nothin but a boy hisself, maybe eighteen, nineteen years old. I didn’t say nothin, just looked at him.

“What you lookin’ at, boy?” he said and spat in the dirt.

The other two just laughed. The white lady didn’t say nothin, just looked down at her shoes. ’Cept for the horses chufflin, things got quiet. Like the yella spell before a cyclone. Then the boy closest to me slung a grass rope around my neck, like he was ropin a calf. He jerked it tight, cutting my breath. The noose poked into my neck like burrs, and fear crawled up through my legs into my belly.

I caught a look at all three of them boys, and I remember thinkin none of em was much older’n me. But their eyes was flat and mean.

“We gon’ teach you a lesson about botherin white ladies,” said the one holdin the rope. That was the last thing them boys said to me.

I don’t like to talk much ’bout what happened next, ‘cause I ain’t lookin for no pity party. That’s just how things was in Louisiana in those days. Mississippi, too, I reckon, since a coupla years later, folks started tellin the story about a young colored fella named Emmett Till who got beat till you couldn’t tell who he was no more. He’d whistled at a white woman, and some other good ole boys—seemed like them woods was full of em—didn’t like that one iota. They beat that boy till one a’ his eyeballs fell out, then tied a cotton-gin fan around his neck and throwed him off a bridge into the Tallahatchie River. Folks says if you was to walk across that bridge today, you could still hear that drowned young man cryin out from the water.

There was lots of Emmett Tills, only most of em didn’t make the news. Folks says the bayou in Red River Parish is full to its pea-green brim with the splintery bones of colored folks that white men done fed to the gators for covetin their women, or maybe just lookin cross-eyed. Wadn’t like it happened ever day. But the chance of it, the threat of it, hung over the cotton fields like a ghost.

I worked them fields for nearly thirty years, like a slave, even though slavery had supposably ended when my grandma was just a girl. I had a shack I didn’t own, two pairs a’ overalls I got on credit, a hog, and a outhouse. I worked them fields, plantin and plowin and pickin and givin all the cotton to the Man that owned the land, all without no paycheck. I didn’t even know what a paycheck was.

It might be hard for you to imagine, but I worked like that while the seasons rolled by from the time I was a little bitty boy, all the way past the time that president named Kennedy got shot dead in Dallas.

All them years, there was a freight train that used to roll through Red River Parish on some tracks right out there by Highway 1. Ever day, I’d hear it whistle and moan, and I used to imagine it callin out about the places it could take me . . . like New York City or Detroit, where I heard a colored man could get paid, or California, where I heard nearly everbody that breathed was stackin up paper money like flapjacks. One day, I just got tired a’ bein poor. So I walked out to Highway 1, waited for that train to slow down some, and jumped on it. I didn’t get off till the doors opened up again, which happened to be in Fort Worth, Texas. Now when a black man who can’t read, can’t write, can’t figger, and don’t know how to work nothin but cotton comes to the big city, he don’t have too many of what white folks call “career opportunities.” That’s how come I wound up sleepin on the streets.

I ain’t gon’ sugarcoat it: The streets’ll turn a man nasty. And I had been nasty, homeless, in scrapes with the law, in Angola prison, and homeless again for a lotta years by the time I met Miss Debbie. I want to tell you this about her: She was the skinniest, nosiest, pushiest woman I had ever met, black or white.

She was so pushy, I couldn’t keep her from finding out my name was Denver. She investigated till she found it out on her own. For a long time, I tried to stay completely outta her way. But after a while, Miss Debbie got me to talkin ’bout things I don’t like to talk about and tellin things I ain’t never told nobody—even about them three boys with the rope. Some of them’s the things I’m fixin to tell you.

8 thoughts on “Same Kind of Different As Me”