Talking to the Dead 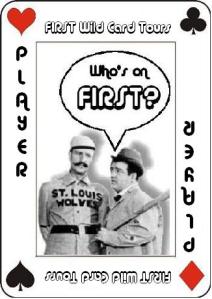 I love being a freelance book reviewer. I have yet to read and review a book that wasn't good. My latest fiction read, is no exception. Bonnie Grove's first novel "Talking to the Dead" is excellent. I couldn't put it down. Bonnie's use of humor in this story is brilliant. I was laughing out loud, amazed at the way she inserts humor into what is traditionally a morose subject. Like Francine Rivers says in her endorsement, I can't wait for Bonnie Grove's next book!
It is time for a FIRST Wild Card Tour book review! If you wish to join the FIRST blog alliance, just click the button. We are a group of reviewers who tour Christian books. A Wild Card post includes a brief bio of the author and a full chapter from each book toured. The reason it is called a FIRST Wild Card Tour is that you never know if the book will be fiction, non~fiction, for young, or for old…or for somewhere in between! Enjoy your free peek into the book!

You never know when I might play a wild card on you!

Talking to the Dead

Bonnie Grove started writing when her parents bought a typewriter, and she hasn’t stopped since. Trained in Christian Counseling (Emmanuel Bible College, Kitchener, ON), and secular psychology (University of Alberta), she developed and wrote social programs for families at risk while landing articles and stories in anthologies. She is the author of Working Your Best You: Discovering and Developing the Strengths God Gave You; Talking to the Dead is her first novel. Grove and her pastor husband, Steve, have two children; they live in Saskatchewan.

©2009 Cook Communications Ministries. Talking to the Dead by Bonnie Grove. Used with permission. May not be further reproduced. All rights reserved.

Kevin was dead and the people in my house wouldn’t go home. They mingled after the funeral, eating sandwiches, drinking tea, and speaking in muffled tones. I didn’t feel grateful for their presence. I felt exactly nothing.

Funerals exist so we can close doors we’d rather leave open. But where did we get the idea that the best approach to facing death is to eat Bundt cake? I refused to pick at dainties and sip hot drinks. Instead, I wandered into the back yard.

I knew if I turned my head I’d see my mother’s back as she guarded the patio doors. Mom would let no one pass. As a recent widow herself, she knew my need to stare into my loss alone.

I sat on the porch swing and closed my eyes, letting the June sun warm my bare arms. Instead of closing the door on my pain, I wanted it to swing from its hinges so the searing winds of grief could scorch my face and body. Maybe I hoped to die from exposure.

Kevin had been dead three hours before I had arrived at the hospital. A long time for my husband to be dead without me knowing. He was so altered, so permanently changed without my being aware.

I had stood in the emergency room, surrounded by faded blue cotton curtains, looking at the naked remains of my husband while nurses talked in hushed tones around me. A sheet covered Kevin from his hips to his knees. Tubes, which had either carried something into or away from his body, hung disconnected and useless from his arms. The twisted remains of what I assumed to be some sort of breathing mask lay on the floor. “What happened?” I said in a whisper so faint I knew no one could hear. Maybe I never said it at all. A short doctor with a pronounced lisp and quiet manner told me Kevin’s heart killed him. He used difficult phrases; medical terms I didn’t know, couldn’t understand. He called it an episode and said it was massive. When he said the word massive, spit flew from his mouth, landing on my jacket’s lapel. We had both stared at it.

When my mother and sister, Heather, arrived at the hospital, they gazed speechlessly at Kevin for a time, and then took me home. Heather had whispered with the doctor, their heads close together, before taking a firm hold on my arm and walking me out to her car. We drove in silence to my house. The three of us sat around my kitchen table looking at each other.

Several times my mother opened her mouth to speak, but nothing came out. Our words had turned to cotton, thick and dry. We couldn’t work them out of our throats. I had no words for my abandonment. Like everything I knew to be true had slipped out the back door when I wasn’t looking.

“What happened?” I said again. This time I knew I had said it out loud. My voice echoed back to me off the
kitchen table.

“Remember how John Ritter died? His heart, remember?” This from Heather, my younger, smarter sister. Kevin had died a celebrity’s death.

From the moment I had received the call from the hospital until now, I had allowed other people to make all of my bereavement decisions. My mother and mother-in-law chose the casket and placed the obituary in the paper. Kevin’s boss at the bank, Donna Walsh, arranged for the funeral parlor and even called the pastor from the church that Kevin had attended until he was sixteen to come and speak. Heather silently held my hand through it all. I didn’t feel grateful for their help.

I sat on the porch swing, and my right foot rocked on the grass, pushing and pulling the swing. My head hurt. I tipped it back and rested it on the cold, inflexible metal that made up the frame for the swing. It dug into my skull. I invited the pain. I sat with it; supped with it.

I opened my eyes and looked up into the early June sky. The clouds were an unmade bed. Layers of white moved rumpled and languid past the azure heavens. Their shapes morphed and faded before my eyes. A Pegasus with the face of a dog; a veiled woman fleeing; a villain; an elf. The shapes were strange and unreliable, like dreams. A monster, a baby—I wanted to reach up to touch its soft, wrinkled face. I was too tired. Everything was gone, lost, emptied out.

I had arrived home from the hospital empty handed. No Kevin. No car—we left it in the hospital parking lot for my sister to pick up later. “No condition to drive,” my mother had said. She meant me.

Empty handed. The thought, incomplete and vague, crept closer to consciousness. There should have been something. I should have brought his things home with me. Where were his clothes? His wallet? Watch? Somehow, they’d fled the scene.

“How far could they have gotten?” I said to myself. Without realizing it, I had stood and walked to the patio doors. “Mom?” I said as I walked into the house.

She turned quickly, but said nothing. My mother didn’t just understand what was happening to me. She knew. She knew it like the ticking of a clock, the wind through the windows, like everything a person gets used to in life. It had only been eight months since Dad died. She knew there was little to be said. Little that should be said. Once, after Dad’s funeral, she looked at Heather and me and said, “Don’t talk. Everyone has said enough words to last for eternity.”

I noticed how tall and straight she stood in her black dress and sensible shoes. How long must the dead be buried before you can stand straight again? “What happened to Kevin’s stuff?” Mom glanced around as if checking to see if a guest had made off with the silverware.

I swallowed hard and clarified. “At the hospital. He was naked.” A picture of him lying motionless, breathless on the white sheets filled my mind. “They never gave me his things. His, whatever, belongings. Effects.”

“I don’t know, Kate,” she said. Like it didn’t matter. Like I should stop thinking about it. I moved past her, careful not to touch her, and went in search of my sister.

Heather sat on my secondhand couch in my living room, a two seater with the pattern of autumn leaves. She held an empty cup and a napkin; dark crumbs tumbling off onto the carpet. Her long brown hair, usually left down, was pulled up into a bun. She looked pretty and sad. She saw me coming, her brown eyes widening in recognition. Recognition that she should do something. Meet my needs, help me, make time stand still. She quickly ended the conversation she was having with Kevin’s boss, and met me in the middle of the living room.

“Hey,” she said, touching my arm. I took a small step back, avoiding her warm fingers.

“Where would his stuff go?” I blurted out. Heather’s eyebrows snapped together in confusion. “Kevin’s things,” I said. “They never gave me his things. I want to go and get them. Will you come?”

Heather stood very still for a moment, straight backed like she was made of wood, then relaxed. “You mean at the hospital. Right, Kate? Kevin’s things at the hospital?” Tears welled in my eyes. “There was nothing. You were there. When we left, they never gave e anything of his.” I realized I was trembling.

Heather bit her lower lip, and looked into my eyes. “Let me do that for you. I’ll call the hospital—” I stood on my tiptoes and opened my mouth. “I’ll go,” she corrected before I could say anything. “I’ll go and ask around. I’ll get his stuff and bring it here.”

“I need his things.”

Heather cupped my elbow with her hand. “You need to lie down. Let me get you upstairs, and as soon as you’re settled, I’ll go to the hospital and find out what happened to Kevin’s clothes, okay?”

Fatigue filled the small spaces between my bones. “Okay.” She led me upstairs. I crawled under the covers as Heather closed the door, blocking the sounds of the people below.

2 thoughts on “Talking to the Dead”