SCL:Claiming Sports are the ROAE 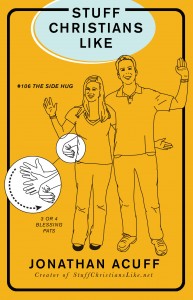 (I reviewed this book last week and loved it! The following post is a contest entry. It's a chance to write my own version of stuff christians like and if I win, I'll be featured on Jonathan Acuff's blog Stuff Christians Like.)

We all know those
families at Church. They’re hardly ever there due to the amount of sports their kids participate in, but we’ve heard about them. We see them occasionally if
they aren’t in an “out-of-state-traveling-competitive-team” tournament.

Sometimes only part of the family will show up on any given
Sunday and that’s when we start in.

If you’re a
Christian family who happens to love sports, use this handy guide for shot
blocking unsolicited advice.

Your response tailored to how many kids you have: We average more like eight games a weekend. An addiction is
something you can’t stop doing. We have three boys who each play two sports.
Sometimes they play double headers. We are talking simple math here friend, not
addiction.

Well-meaning judger: Sports get in the way of family time.

You: Yes, I can see it would get in the way of couch time in
front of ESPN while your wife blogs and your kids play video games.

Well- meaning judger: You never let your kids play, or just be kids.

You: I’m sorry little Johnny/Jane doesn’t have an athletic
bone in his/her body. We’ll play, I mean pray for you.

You: They pray before free throws and point toward the
sky in the end zone. That single finger point clearly gives all the glory where
it’s due. Sure Matthew 6:5-6 tells us to pray in a secret place. However it’s
hard to be humble when you play in eight games a weekend.

You: You just don’t want my kid to witness more than yours.
Obviously when my son kneels in the end zone he’s ministering to the masses.
That’s more effective than knocking on one door at a time.

Well-meaning judger: Your kids give up their right to ask for God’s safety if
they choose to endanger themselves on the insane court of basketball.

You: I’m still searching the Bible for the list of things I
can’t go to God about. When I
find it, if “standing on the soccer field” tops the list, we’ll quit. By the way, I find you very competitive, almost sports-like.

Well-meaning judger: Sports are the ROAE. The root of all evil I tell you.

You: Actually in 1 Tim. 6:10, it says the “love of money” is
a root of all kinds of evil. The words sports and money are not
interchangeable. Unless you’re talking about professional athletes, then indeed
the words are synonymous. But the most my kid has asked for is to “show
him the Gatorade.”

And finally, when they next level it by stating “Asking God for a win
implies that he is an arbitrary God.” You simply reply: I don’t know much, but
Jesus loves me, this I know.

Arbitrary or not, this I know.

3 thoughts on “SCL:Claiming Sports are the ROAE”