Archive for the tag “Susan Isaacs”

By 2004, my spiritual and professional life had hit the skids. The only job I could get was working at a church office. (God sure has a sense of humor). It wasn¹t a bad job, actually. My bosses were cool, and my pastor let me come into his office at lunchtime and vent my frustrations and doubt. He¹d nod and say, ³Yeah, I know what you mean.² He loaned me several books that encouraged my faith. Not happy titles, mind you: Dark Night Of the Soul by St John of the Cross, Shattered Dreams by Larry Crabb, and A Grace Disguised by Jerry Sittser. The latter title sounds positive, but it¹s written by a man whose wife, mother and daughter were killed by a drunk driver. The book is great. Read it. 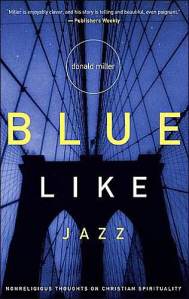 But it wasn¹t my pastor who told me about Blue Like Jazz. It was this random artsy guy who stopped in to visit the seminary intern working at the office. You know these young, artsy guys. They dabble in creative pursuits. They have their whole lives ahead of them and think the answers to all their questions will be Yes and Amen. ³Get back to me in ten years,² I want to tell them. So this artsy guy was sitting across from my desk, raving about some über hip writer who had defined faith for his generation. ³Blue Like Jazz,² he said and tapped on my desk. That¹s all he said: ³Blue Like Jazz. Read it.² And then he and the seminary intern went off to smoke cigars.

Two weeks later our pastor brought in an entire box of Blue Like Jazz and gave me a copy. It was like he was daring me to read it. I took it home, ready to pick it apart with my cynical, artistically mature eye. I didn¹t want some young hipster dilettante telling me what my life was like. Then I read the intro. I had to admit his analogy was creative: God was like jazz because neither resolved. He had a way with words. I read the first couple of chapters and had to admit he made some great points. When he said that going to a big church ³was like going to church at the Gap² I laughed out loud. When he wrote about the confessional booth, I cried. Blue Like Jazz was better than Random Artsy Guy had said. It was terrific, and Don Miller became my hero.

When I sat down to write my own book, I thought of Blue Like Jazz and Traveling Mercies. Those books gave me permission to write honestly, and provided a yardstick with which to measure my own work. Six years have passed. I¹ve had the privilege to meet Don and get to know him. He's not some über hip artsy dilettante. He's a funny, talented, generous guy. I got to tour with him last fall. (God really has a sense of humor).

For the past two years, Don and Steve Taylor have been trying to make a movie based on the book. I read the screenplay, and it¹s great. But they¹ve run into problems with financing. And after two years they have finally given up. So, how come this insanely popular book can¹t get made into a low budget movie? Money. Basically, the guys who have the money to make the movie aren¹t from the same generation as those who¹ll go see the movie. The money guys probably like going to church at the Gap. They don¹t cuss or smoke (at least, not in public). The movie has a little cussing and smoking, and the Money Guys can¹t get around that. Now in Hollywood, old guys fund young-guy films all the time. Who do you think funded Superbad? Not Michael Cera¹s friends. But in faith-based filmmaking, they can¹t bridge the gap.

On September 16, Don announced on his blog that the movie was being shelved. In Hollywood they say it ³went away,² because no one likes to say ³over.² But the film was over. Or was it? Two crazy young guys got an idea: get the kids who love the book to come up with the $125,000 still needed to make the movie. It was like Michael Cera¹s friends decided to pass the hat. Here¹s their video.

Maybe you're thinking: ³Why should I donate? I¹m an old white guy. I like wearing Dockers to church.² Or, "I'm a young white guy and the movie will ruin the book for me." Or, "I'm poor, I don't have a buck to spare." Well I¹m an old white chick. I go to an old musty church with incense and choir robes. But if we are going to show how Jesus matters to another generation, we need to speak that generation¹s language. Young twenty-something hipsters won¹t respond to the things I respond to. But they¹re going to respond to the way Jesus and faith are presented in this movie, because it¹s written for them. Do you have a child or a friend who doesn't "get" your faith? If you could make Jesus come alive to him or her, would you spend ten bucks to do it? Then do it. I¹m that random artsy guy tapping on your desk. "Blue Like Jazz. Fund it."